After an initial inspection with the small boats to confirm the presence of the driftnet, they immediately coordinated with the Italian Coast Guard to bring in Catarina’s Marine Authority patrol vessel carrying National Fisheries inspectors. Once they verified the 5-kilometer long net with its 20cm mash was an illegal driftnet, the crew proceeded to pull in the net for confiscation. There were 40 animals trapped in the deadly net, including two sharks, one which was found alive and released back into the sea.

Operation Siso is a campaign to stop illegal fishing – with a focus on the use of illegal fishing equipment such as driftnets – in the Mediterranean Sea’s UNESCO-listed Aeolian Islands off Italy’s west coast. 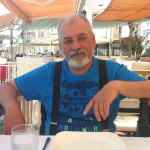